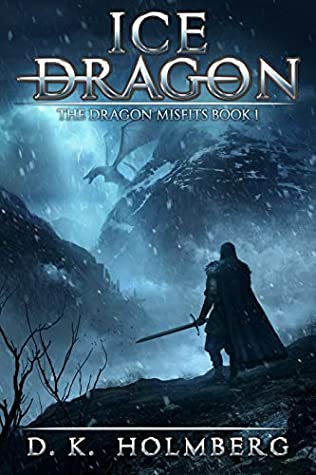 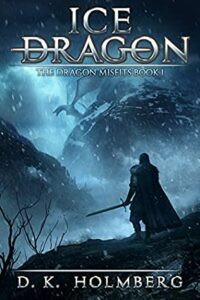 A book with a dragon. I thought; I like dragons. It has a great cover. This will be an exciting read.

Then, about halfway through the book, I looked at the cover again. There IS a dragon in here, isn’t there? So, far there was a lot of running around, being cold, sliding down a mountain (for what felt like several chapters), some more running around and a hint of mystique. But no dragon. And that’s one of my biggest hurdles with this book. It takes forever to get interesting if you’re in it for the dragons…

D.K. Holmberg isn’t a well-known writer to me. He has several series, several with dragons, and his writing is certainly creative. He has plenty of readers and a good following from the looks of it. Enough to make me a bit jealous. But after this book, I don’t see WHY yet. What he does do, is come up with unique descriptions that speak to the imagination. Which is inspiring, but overall this was not enough for me to really get into the book.

To be fair, it’s not a very long book, so even though the story feels dragged, it was a quick read (and I don’t read that fast to begin with). On the other hand, it is one of the first writers where I really noticed a go-to word. You know, one of those words that you constantly see popping up in every chapter. I always try to avoid them myself (though I fear I’m bound to have some) because they can have a disruptive factor to particular types of readers.
In this case it was the phrase ‘the other man’ that caught my eye. It often referred to different persons as well, while the perspective stayed with the main character. Every time it popped up, I kept wondering who of the two or three people in the scene the writer actually meant by it.

Eventually, around 66% of the book an actual dragon shows up. Mind you, not the dragon that the entire book teases about. No, that’s even later. But a dragon, nonetheless. From there, things do pick up a little. Additional cast are introduced, and I actually started to wonder a little what larger scale event was going on. However, I can fully understand that not every reader will reach that part as I almost DNF it myself.

Some people might not be bothered by the flow of this story and the use of powers are certainly unique in some of the scenes, but Ice dragon did not invite me to read the rest of the series as much as I hoped. I guess, I’ll have to get my next shot of dragon somewhere else.