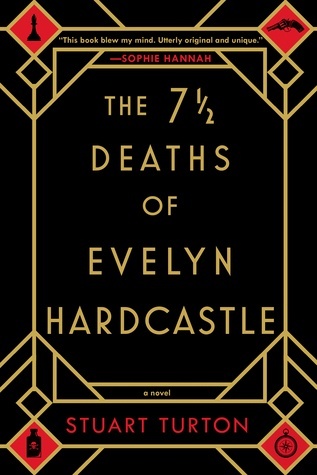 This book was a step out of my comfort zone. I’ve never really read any thrillers or murder mysteries, though I did often watch ‘Murder She Wrote’ with my mom when I was younger. The 7½ Deaths of Evelyn Hardcastle (or 7 deaths if you live outside of the USA) has certainly got that same vibe at its core, but (to mix things up) poured over it is a good deal of “Groundhog Day”, where the main character reliving the same day eventually leads to the grand finale of the murder mystery. So… how did this exploration outside my normal reading routine turn out for me?

Since this isn’t a murder mystery post (or is it???), let me tell you right away: It was so-so. I think it was a good book, but not a right fit for me. If I had simply chosen it to read myself, I might have bailed on it, as especially the beginning was a confusing crawl through mud as we wake up with the MC, Aiden. However, I wanted to read this book after giving it to my mother earlier in the year as a present. She had some surgery and was in heavy recovery, so I thought I would give her something to pass the time. Unfortunately, I think I merely succeeded in confusing here in a pretty frustrating way as it was hard for her to keep her concentration for long periods of time while being on the pain killers… sorry mom!

It did push me to struggle through.

Because Aiden doesn’t know what’s going on in the beginning, the first quarter of the book was a slog. On the positive side, I really found the descriptions and prose of high quality, it delivered on the “Downtown Abby” feel that the back of the book described. The story takes place in a big, run-down Victorian style house, where (besides a confused MC) there’s plenty of characters present; almost to the point that one would need a notebook to keep track of things. And then the “Groundhog Day” hits and you go, wait a minute! What’s going on here? Aiden wakes up in a new person. Memories intact, but the day starts anew.

From there, the plot thickens, seven times over. It became more interesting to read and Stuart Turton did an excellent job in describing very different people and urges. By putting Aiden in their heads, Stuart shows how different people live in their own defined “prisons”. Bound by their personalities and the desires that drive them.

Some characters were easier to experience than others, my obstacles mainly being those people that moved slow because they were old or fat. I figure it reflects my own fears/annoyances that our lives slow down as we get older. Your body isn’t as fit as it used to anymore and physical things take more efforts to achieve.

We relive the day together with Aiden from different perspectives and slowly (a little too slowly…) the mystery unravels.

That is, until the last fifty pages or so. Toward the end, things pick up speed considerably and the twist was a good enough pay-off in my opinion. However, I found that the truth came a bit out of nowhere. Now this might have been by choice, or the norm in murder mysteries, but when the clue was revealed, it wasn’t the end. I’ve seen films explore this as a joke, where the comedy finishes with reveal after reveal after reveal.

In this case, there was an entire layer behind it that the reader had not been able to piece together as large parts of the puzzle we not even given. The way that it did pay off, was that Stuart wrapped up your reader questions that popped up along the way very nicely. Given the fact it all fell into place nicely, either seen or unforeseen, I tend to lean toward the “by design” and I have to give Stuart credit for a well-executed structure. I just felt a bit cheated out of figuring out the circumstances myself. Then again, if I think about all those murder she wrote episodes, it was often like that… so probably my expectations were simply not in line with the book.

Would I recommend the 7½ Deaths of Evelyn Hardcastle to people? Yes, I would, especially if they like murder mysteries. The writing is excellent, and there is enough to break your brain over as Aiden struggles his way toward the end, just be aware this is a book shaped as a layered conversation and not an adrenaline ride… I simply just prefer the latter.