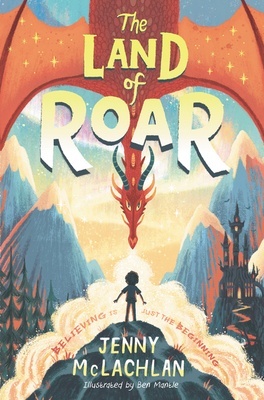 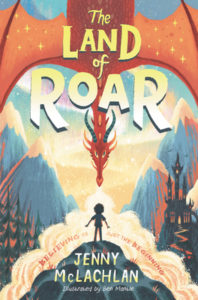 Hear me roar! What a fun book this was to read! This is of course a children’s book, but that did not dampen the fun for me. My daughter (9) got this book as a present. It was her fantasy book to read and what a marvelous introduction to the genre it was. To go onto this adventure together, we decided to take turns reading the book and it did not disappoint.

The main characters Arthur and Rose are in a difficult time of their twin life where the two are growing apart, to great disappointment/frustration of Arthur. But when their Granddad is pulled through the fold-up bed in the attic and taken to the twins’ old imaginary kingdom ‘The land of Roar’, Arthur sees no other choice but to follow in order to save his grandfather from the clutches of Crowky, the evil scarecrow.

Now there were a few things that really make me like this book. The writing was on an excellent young reader level, while still providing plenty of depth into the characters with themes that fit very well for kids around the age of ten, in their early teens.
The other was that my daughter is actually scared of scarecrows and was constantly running up to me screaming that it was such a thrilling book. Scary, but in a good way.
The cast of characters are diverse and this first book introduces plenty to explore in the follow-up novels. A few examples: Ninja-wizards, rowdy girls, unicorns, mermaids, DRAGONS and tiny flying wooly/cotton candy creatures. The journey does not disappoint.

What my daughter said about it

“I liked it a lot. It was exciting and a bit scary. I liked Hexia as a character the best (Dad note: Hexia is the mermaid/witch which is actually not seen in the entire book, but my daughter likes the idea of her the best haha.) and after that Arthur and Rose. I can’t wait to read the second book.”

My youngest (son, 7) has decided to start reading the book too… just not right before bed or he’ll have too vivid dreams. Together they have started designing a theme park for the Land of Roar, in which a Crow’s nest (the castle of Crowky) haunted house, dragon rollercoaster, unicorn carrousel, mermaid show and magic/fighting show where my kids fully plan to cosplay their favorite characters and make a living from it later in live. Oh, and the writer, Jenny McLachlan, will get complementary tickets for life of course. 😉

All in all, this was an excellent experience and the most fun I had while reading a book in a long while. And to be honest, I needed it. I needed to feel that excitement you got as a kid from letting your imagination run wild. Where the world was carefree, only limited by your own imagination, no matter how scared you could make yourself (like walking in the woods alone and telling yourself you’re being followed by something!).

I can wholeheartedly recommend ‘The Land of Roar‘ to parents and their young fantasy-readers-in-the-making, or just adults who are looking for a fun trip back to their childhood fantasies in a non-complicated way. If I would give my reviews any stars here on the blog, it would have been a five out of five for sure.